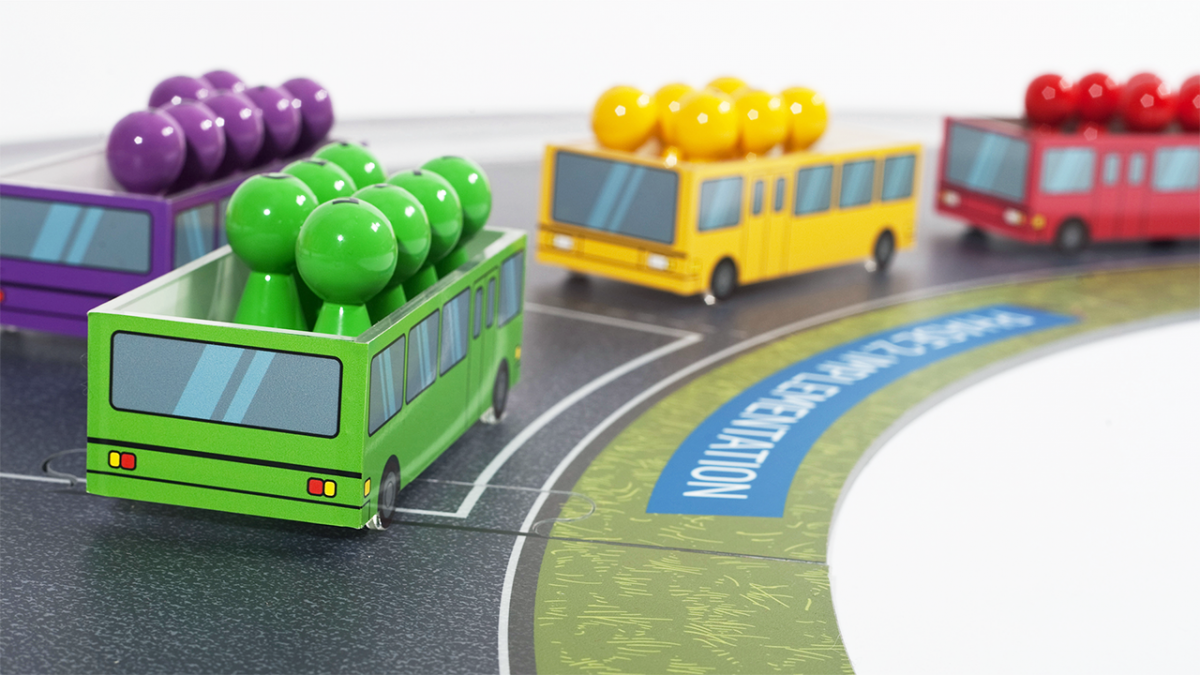 John Kotter, the author of XLR8, is the Konosuke Matsushita Professor of Leadership, Emeritus, at the Harvard Business School. Kotter is the author of 19 books, 12 of which have been business bestsellers and two of which are overall New York Times bestsellers. Probably the most widely known of his topics and theories is his 8 steps in change management. Much of his work, like the new book XLR8, is focused around these steps, which were first introduced in his book ‘Leading Change’, published in 1996. XLR8 takes the steps and, by its name, accelerates them.

We have considered what it means for our board game -based leadership simulation, Wallbreakers®, as one of the theories integral to the game is Kotter’s 8 steps. The article below gives a summarized glimpse to XLR8, as well as a view to how it is reflected in Wallbreakers

XLR8 is all about handling strategic challenges fast, with agility and creativity, in order to respond to the narrow windows of opportunity of today’s world. Referencing Nobel Laureate Daniel Kahneman on the brain as two coordinating systems, Kotter’s solution for organisations is similar. He offers a re-structuring of the organisation into a dual system that can nurture and accelerate strategic changes. This dual system is divided to a left, traditional and hierarchical side, and a new right side of networks and innovation. This structural change, building a dual operating system and maintaining it, is at the core of the book.

The idea of the network

Kotter discusses how successful organisations all begin their lives with a structure similar to the network, and as they grow the structure develops into a hierarchy. This inevitable development causes the once agile and quick organisations to slow down, as hierarchical organisations are by nature slow. Yet, he presses that the hierarchy and structure are a necessity. This is where the network comes in. It complements the hierarchy in a situation that is not either/or, but both/and.

Importantly, it is all about creating connecting points. The network needs to be populated by people from all over the organisation, from all levels of the hierarchy, and from all silos. This allows for information from different locations to encounter information it does not usually meet, leading to innovation and ‘eureka!’ moments.

“Duals systems, which can handle strategy in a very different way than is the norm today, are helping people thrive and win.”

Eight accelerators, instead of 8 steps, accompany the five principles and give the books its name. They act as building blocks for the dual system. 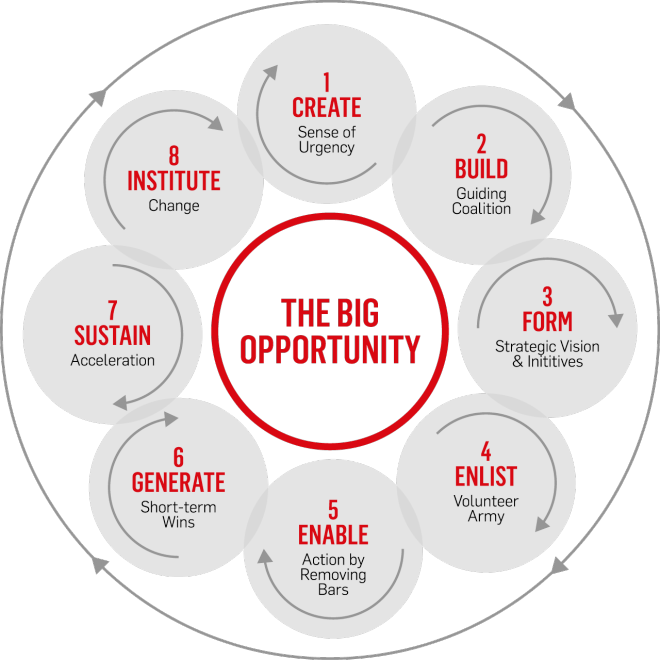 “They (the accelerators) begin creating the (dual) system as soon as they engage your biggest strategic challenge or big opportunity; they continue to build and reinforce the system in an organic way, becoming stronger and more self sustaining, giving you the agility and speed to deal with an ever faster-moving and more volatile world.”

The eight accelerators build on Kotter’s steps from ‘Leading Change’, first published 15 years ago. As its name indicates, the steps are accelerated in the new book.

The Big Opportunity: instead of problem solving, Kotter proposes that organisations should focus on The Big Opportunity (TBO). TBO is not the same as a vision – it is much more concrete; nor is it the same as a strategic initiative, or strategy – it is much simpler. Kotter states that vision and strategy often point inwards, whereas TBO points outwards. The most effective TBOs are ‘rational (why us, why now, why…), emotionally compelling (a sincere, positive, authentic appeal to the heart), and memorable (clear, short, no jargon)’.

In connection to The Big Opportunity, Kotter presses the need to relentlessly role model and develop a sense of urgency. There is an important definition to make in connection to urgency here, however.

Kotter uses the term to mean that ‘significant numbers of people wake up each morning and have, somewhere in their heads and hearts, a compelling desire to do something to move the organization toward a big strategic opportunity’. This makes the first accelerator his most important one. TBO feeds into a change vision, which in turn informs strategic initiatives. It is the key to a functional dual system. A TBO is easier for people to take hold of, and it encourages initiative. It is the stuff that makes the important connections between the two systems.

The challenges with a dual operating system, as Kotter sees it, are ensuring that the two parts of the system work well together, building momentum, and dealing with potential resistance among people accustomed to a traditional hierarchy. Some of the Accelerators address these issues directly. Creating a strong sense of urgency, together with creating and communicating wins from the start should help battle resistance and build momentum. The two parts hold best together when the executive committee and the guiding coalition develop and maintain the right relationship.

“Think of it (the dual operating system) as a vast, inexpensive, and structured expansion –in scale, scope, and power– of the smaller, informal networks that accomplish important tasks faster and cheaper than hierarchies can.”

Because a dual system evolves, it doesn’t jolt the organisation the way sudden dramatic change does. Evolve as it may have, the network side of the dual systems needs maintenance and support just as the hierarchical side does, too.

Kotter concludes that the single operating systems are hurting organisations now, and will eventually kill those who do not evolve toward fundamentally new form(s).

The main difference between ‘Leading change’ and ‘XLR8’ is that the former is about leadership actions where the latter discusses organisational structure. Below is a summary of differences between the ‘steps’ and the ‘accelerators’: 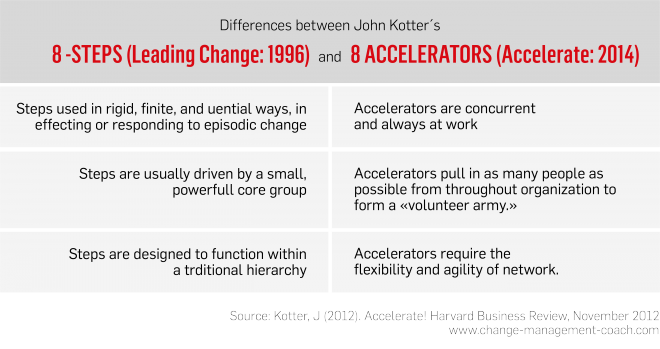 A direct comparison of the 8 actions in both works shows that main differences are piled onto the first half of the set. They rotate around a few red threads that also run through the book: The Big Opportunity, Head and Hearts, Connecting People, Volunteers, Key People.

What it means to facilitators of Wallbreakers

The game provides the participants with a variety of leadership actions to choose from. These actions, and the reactions they draw from the game and the characters in it, are based on a number of well known academic theories. Amongst them is Kotter’s 8 steps, and also his 8 pitfalls, which discuss leadership actions in a change process.

As such, Wallbreakers and XLR8 are focused on different aspects of an organisations capability to change, and are not directly comparable. However, certain principles and lines of thought apply to both.

Several leadership actions in Wallbreakers appeal to heads and hearts of the employees. They discuss the employee’s feelings and experiences, and communicate to them how valued their involvement is. The notion of volunteering and having the right people on board is also present, and several actions allow the leader to give these individuals the chance to lead by example and inspire the rest of the employees.

Most clearly however, the idea of acceleration is visible in how the bus, the game’s metaphor for the department, moves forward at an accelerated pace when 8 or more employees are on board. Thus the whole process is accelerated, yet the road through the three stages of change continues to the end of the anchoring phase, where the organisation finally arrives at the ‘This is how we do things around here’- status.

A facilitator of Wallbreakers can utilise a good selection of the game’s action cards to steer the conversation to the key points of XLR8, if they so wish. Below are some examples, but there are many more opportunities in the game for a skilled facilitator.

In phase one, action #2, ‘Tell me what you think’, opens the discussion directly to the notion of heads and hearts, that Kotter emphasises with accelerator number four. The management action the card represents is a dialogue with the employees about their experiences and feelings. IT encourages communicating that the efforts of the employees are appreciated, and their involvement is welcomed.

Action #11, ‘That’s why it is necessary’, is aimed at creating a sense of urgency. The card gives a good starting point for a discussion on The Big Opportunity (accelerator number one), and for reflections and comparisons between the burning platform (Kotter’s step number one). The burning platform has a more negative emphasis, where the Big Opportunity has a positive emphasis.

In phase two, action #4, ‘Create team mates’, speaks of connecting people, and selecting some key people to spread the good message forward in the organisation. It addresses Kotter’s step number two, and is an easy bridge to discussing team formation and the unofficial network of connections within a company that accelerate advocates.

Action #9, ‘We are builders of cathedrals’, generates short term wins – a step both approaches share. It can be used to discuss either view, or both, depending on the facilitators wishes.

In phase three, action #1, ‘Front Runners’, combines heads and hearts with connecting people. Its action is to select certain people who have embraced the change initiative, and employ them to appeal to the others. This action card can be used as a talking piece for both Kotter’s original step number eight, as well as accelerator number eight – instituting change.

Action #9, ‘Autonomous’, is aimed at Kotter’s step five, empowering people to act for the vision. The card gives a good stepping stone for a discussion on different kinds of barriers to empowerment and individual action, thus addressing also accelerator number five.